PROTHONOTARY WARBLER  ALLIGATOR LAKE NEST BOX PROJECT
Prothonotary Warblers utilize flooded hardwood swamps with
openings and sparse underbrush as nesting and typical migration
habitat.  Historically they have nested at Alligator Lake and are expected during migration.  They were not present during drought years but for the past 2 years (2012-2013) the wooded wetlands at Alligator Lake along Price Creek and isolated drainage channels have provided optimum habitat.  Therefore, the Audubon Society constructed and placed 8 nest boxes in suitable habitat.  They will be monitored and activity posted.  All the boxes are near hiking trails and visible to diligent observers.  If used, the clear whistled songs and sightings of the beautiful birds will be a delight for local bird appreciators. 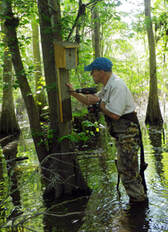 PROTHONOTARY WARBLER LIFE FACTS
The Prothonotary Warbler is one of our most striking breeding birds in north Florida.   It is considered a “trans-gulf” nocturnal migrant, arriving to breed here in early April, leaving for Central and South America in September.  Males migrate earlier than females.  The species usually migrates along watercourses.  They usually lay 4-5 speckled eggs in their moss-lined nest cavity.  Eggs are incubated only by female for 12-14 days.  Both parents feed the young which remain in the nest for about 10 days.  They eat insects, snails, isopods, and spiders.  Males forage higher in trees; females often on moss covered logs.  They methodically “leaf glean” primarily, but sometimes “hover glean” and occasionally catch flies and moths aerially. ​ 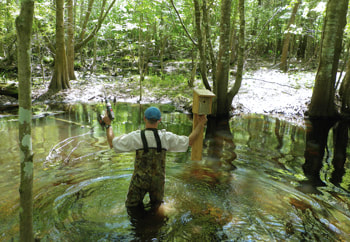 HABITAT REQUIREMENTS
Habitat destruction or degradation is a factor determining healthy populations of most bird species.  A flooded hardwood along streams or rivers is required habitat of Prothonotary Warblers.  Habitat destruction could include deforestation by logging or conversion to croplands or pasture.  Narrow buffer zones may provide inadequate habitat.  Stream channelization for flood control or land draining eliminates habitat.  Altering hydroperiods (frequency, extent and duration of flooding) may “dry up the swamp” or alter tree species community.  Prothonotary Warblers depend upon extensive intact mangrove forests in coastal areas during winter, non-breeding season. 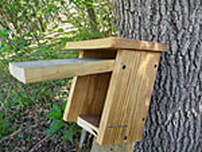 PROTHONOTARY WARBLER NEST BOX PROJECT
Nesting success of Prothonotary Warblers is primarily dependent upon 2 factors: availability of flooded hardwoods and availability of nest sites- tree or artificial cavities.  Naturally occurring nest sites may or may not be abundant or optimal.  Naturally cavities in suitable habitat may be in short supply; may be subject to flooding; may be in rotten trees which fall during nesting season; may have larger holes allowing parasitism from cowbirds or competition from chickadees, titmice, Carolina Wrens or flying squirrels.  Suitable habitat consists of streams with wide wooded corridors or fairly large intact flooded forests.  Alligator Lake during wet years (such as 2012 and 2013) has suitable habitat and the placement of nest boxes may increase nesting success.
WARBLER MIGRATION
Most warblers are called Neotropical migrants (along with most thrushes, tanagers, orioles), spending the winter in Central and South America with other members of the Wood Warbler family and associates in related families such as honeycreepers and tanagers.  Of the 38 species nesting in eastern USA many but not all make the round trip south every year.  Some fly over Atlantic Ocean being helped by trade winds.  Some cross the Gulf of Mexico basically on strength and savvy.  The short route via Yucatan peninsula leads many species to winter in Central America.  Some wander westerly of Appalachians and fly over land to central Mexico and points south.  Warblers are primarily soft bodied insect feeders.  You could say they leave summer home when it gets too cold for insects, or populations decrease.  Or you could say they leave crowded tropical winter home and come north to exploit abundant insect hatches to have plenty of food to raise young.  Either way they are amazingly good at what they do!

WARBLER NESTING HABITS
Warblers nest in many and varied habitats.  Some are specialists such as Kirtland’s in Michigan, nesting exclusively in young Jack Pine forests following natural fires.  Swainson’s Warbler nests only in dense canebrake or Rhododendron thickets of the southeast, including north Florida.  Pine Warblers nest in pines.  Prothonotary Warblers nest in hollow limb or snag cavities in or adjacent to flooded hardwood swamps.  Most species are very specific beyond human appreciation!  “Generalists” (to human eyes) in mixed evergreen or deciduous forests actually have preferences’ for certain mixes of open spaces in tree canopy, height above ground, nearby vegetation or water, various tree species, nearness to tree trunk, limb size leaf sizes, or even clusters of vines.  Careful observations prompts appreciation.
WARBLERS IN FLORIDA
Not all of eastern USA 38 species of warblers choose to nest in Florida.  We have 8 regularly nesting species; Northern Parula and Yellow-throated in mixed woods; Pine in open/mixed pine woods; Common Yellowthroat in brushy thickets and wet lake margins; Hooded in understory of dense woods; Prothonotary in flooded hardwood or cypress swamps; Swainson’s of dense canebrake like thick swamps; Prairie in clear-cut or regenerating pinelands of northern counties and a subspecies in south Fl. mangroves.  Kentucky is uncommon in panhandle deep deciduous woods and Louisiana is rare along streams in north Fl.  A subspecies of the Yellow Warbler, “Caribbean
Golden” is uncommon in southernmost Fl.  Likewise not all warbler species necessarily leave USA for the winter.  We have 7 regularly occurring winter visitors in NC Fl.  The flock forming Yellow-rumped is abundant in woods, thickets and urban habitats.  They can survive on fruit such as wax-myrtle berries and are actually common in most of SE USA, along mid-Atlantic coast to NJ and lower Mississippi River valley states.  Palm Warblers prefer open field edges, are mostly seen near the ground and are also flock forming.   The solitary Orange-crowned is often overlooked feeding amidst buds and twigs along woodland borders.  The Black and White feeds close to tree trunks like a diminutive woodpecker, gleaning crawling insects from bark crevices.  The Ovenbird skulks around in wooded understory of mixed forests.  Common Yellowthroat, Yellow-throated and Pine are permanent residents in basically same habitats in which they nest.  In south Fl. numerous Neotropical warbler species are prone to spend the winter in the mild sub-tropical climate, even though the normal range for their species is in Central or South America.